Pectus excavatum is a condition in which the person's breastbone is sunken into the chest. In severe cases, pectus excavatum can look as if the center of the chest has been scooped out, leaving a deep dent.

While the sunken breastbone is often noticeable shortly after birth, the severity of pectus excavatum typically worsens during the adolescent growth spurt. 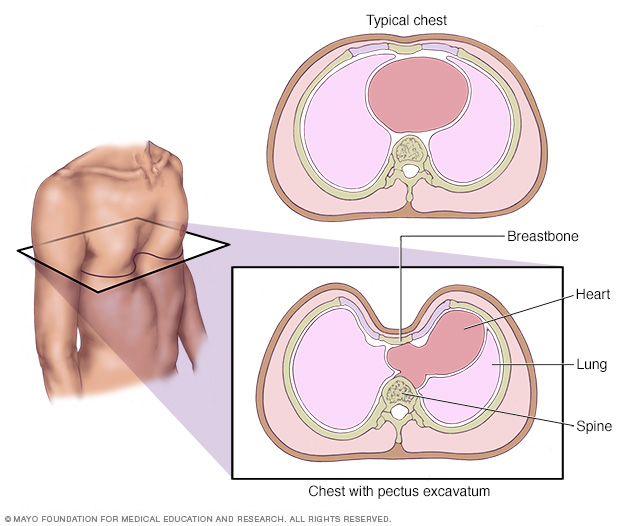 Pectus excavatum is a condition in which a person's breastbone is sunken into his or her chest. Severe cases of pectus excavatum can eventually interfere with the function of the heart and lungs.

For many people with pectus excavatum, the only sign or symptom is a slight indentation in their chests. In some people, the depth of the indentation worsens in early adolescence and can continue to worsen into adulthood.

In severe cases of pectus excavatum, the breastbone may compress the lungs and heart. Signs and symptoms may include:

While the exact cause of pectus excavatum is unknown, it may be an inherited condition because it sometimes runs in families.

Pectus excavatum is more common in boys than in girls. It also occurs more often in people who also have:

If the depth of the breastbone indentation is severe, it may reduce the amount of room the lungs have to expand. This compression can also squeeze the heart, pushing it into the left side of the chest and reducing its ability to pump efficiently. This can cause symptoms such as exercise intolerance, shortness of breath, rapid heart rate, and chest pain or pressure.

Many people who have pectus excavatum will also tend to have a hunched-forward posture, with flared ribs and shoulder blades. Many are so self-conscious about their appearance that they avoid activities where their chest can be seen, such as swimming. They may also avoid clothing that makes the indentation in their chests more difficult to camouflage.

Pectus excavatum can usually be diagnosed simply by examining the chest. Your doctor may suggest several different types of tests to check for associated problems with the heart and lungs. These tests may include:

If the depression of your breastbone isn't causing any symptoms but you're unhappy with how it looks, you could talk to a surgeon about having a silicone insert — similar to a breast implant — placed under your skin to fill in that space.

The two most common surgical procedures to repair pectus excavatum are known by the names of the surgeons who first developed them:

There are many options for pain control after surgery to help improve recovery. Cryoablation temporarily freezes the nerves to block pain after surgery and can help with recovery and decrease postoperative pain for 4 to 6 weeks.

The FDA has recently approved the use of suction cups to help raise the depressed breastbone in younger patients developing pectus. Used for 20 to 30 minutes daily, this is a potential treatment to prevent the worsening of pectus in children as they grow. 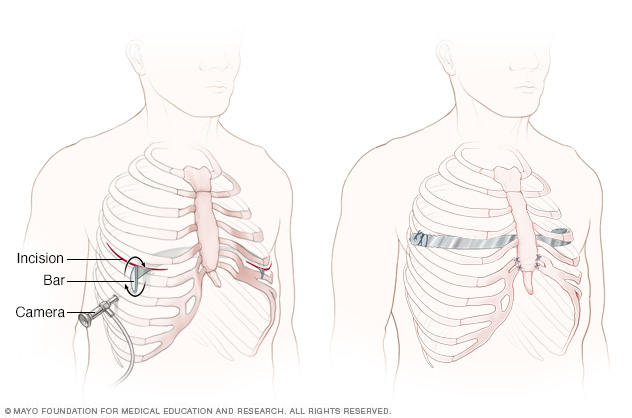 The Nuss procedure inserts a curved metal bar through small incisions on each side of the chest. The bar is then flipped over to create an arch that presses upward on the breastbone. In some cases, more than one bar is used.

Most adolescents just want to fit in and look like their peers. This can be exceptionally difficult for youngsters who have pectus excavatum. In some cases, counseling may be needed to help master coping skills. Online support groups and forums also are available, where you can talk with people who are facing the same types of problems.

If you or your child has pectus excavatum, you might first discuss the condition with your family doctor. He or she may refer you to a doctor who specializes in pediatric or thoracic surgery.

You may want to note down the following information:

Your doctor is likely to ask questions, such as: