Naegleria (nay-GLEER-e-uh) infection is a rare and almost always fatal brain infection. Naegleria infection is caused by an amoeba commonly found in warm, freshwater lakes, rivers and hot springs. Exposure to the amoeba usually occurs during swimming or other water sports.

The amoeba — called Naegleria fowleri — travels up the nose to the brain, where it causes severe brain damage. Most people who have naegleria infection die within a week of showing symptoms.

Naegleria infection causes a disease called primary amebic meningoencephalitis (muh-ning-go-un-sef-uh-LIE-tis) — also known as PAM. PAM is a brain infection that leads to brain swelling and the destruction of brain tissue.

The symptoms of naegleria infection generally begin within two to 15 days of exposure to the amoeba. Initial signs and symptoms often include:

As the disease worsens, signs and symptoms may also include:

The disease can progress rapidly and typically leads to death within about five days of the start of symptoms.

Seek immediate medical attention if you develop a sudden onset of fever, headache, stiff neck and vomiting, particularly if you have recently been in warm, fresh water.

Naegleria infection is caused by the Naegleria fowleri amoeba, which is most often found in bodies of warm, fresh water around the world, especially during the summer months. The amoeba is also sometimes found in soil. The amoeba enters your body through your nose via contaminated water, mud or dust, and travels to your brain through the nerves that transmit your sense of smell.

Only a tiny percentage of the millions of people who are exposed to Naegleria fowleri ever get sick from it. Why some people become infected after exposure and others don't isn't known.

The amoeba doesn't spread from person to person. You also can't be infected by drinking contaminated water. Salt water, such as ocean and sea water, and properly cleaned and disinfected swimming pools don't contain the naegleria amoeba.

Millions of people are exposed to the amoeba that causes naegleria infection each year, but only a few people get sick from it. Between 2010 and 2019, 34 infections were reported in the United States.

Some factors that might increase your risk of naegleria infection include:

The Centers for Disease Control and Prevention (CDC) suggests that the following measures may reduce your risk of naegleria infection:

Infection with the naegleria amoeba is usually confirmed through a laboratory test of cerebrospinal fluid (CSF), the fluid that surrounds the brain and spinal cord.

To get a sample of CSF, a doctor performs a spinal tap (lumbar puncture). During this procedure, a needle is inserted between two vertebrae in the lower back. A small amount of CSF is removed and sent to a lab, where it is examined under a microscope to determine whether the naegleria amoeba is present. A spinal tap can also be used to measure the cerebrospinal fluid pressure and look for inflammatory cells.

A doctor may order imaging tests, such as computerized tomography (CT) or magnetic resonance imaging (MRI) to reveal swelling and bleeding within the brain. 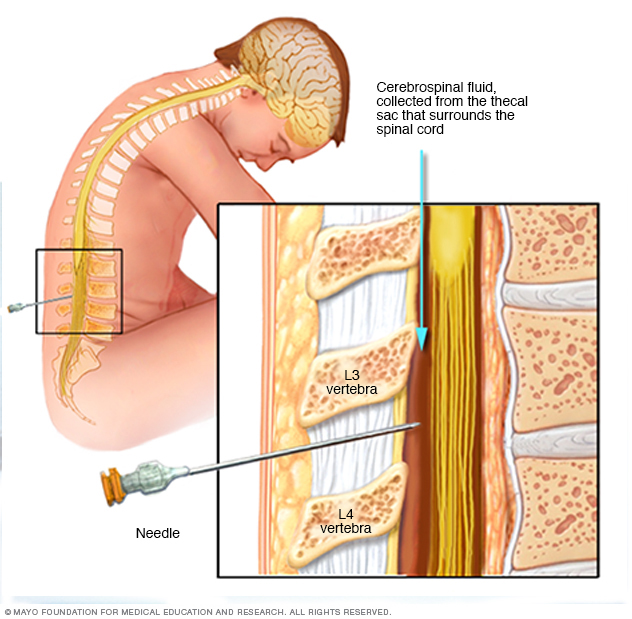 During a spinal tap (lumbar puncture) procedure, you typically lie on your side with your knees drawn up to your chest. Then a needle is inserted into your spinal canal — in your lower back — to collect cerebrospinal fluid for testing.

Few people survive naegleria infection, even with treatment. Early diagnosis and treatment are crucial for survival.

The recommended treatment for naegleria infection is a combination of drugs, including:

In addition to these drugs, your doctor may recommend other medications or treatment options to manage or decrease brain swelling.

If you believe you or your child may have naegleria infection, seek immediate medical attention. You might want to make a list of answers to the following questions: