Dural AVFs tend to occur later in life, and they're not typically passed on genetically — children aren't more likely to develop a dAVF simply because their parent has.

Although some dAVFs stem from identifiable causes, it's thought that dAVFs involving large brain veins usually develop due to narrowing or blockage of one of the brain's venous sinuses, which normally route circulated blood from the brain back to the heart. 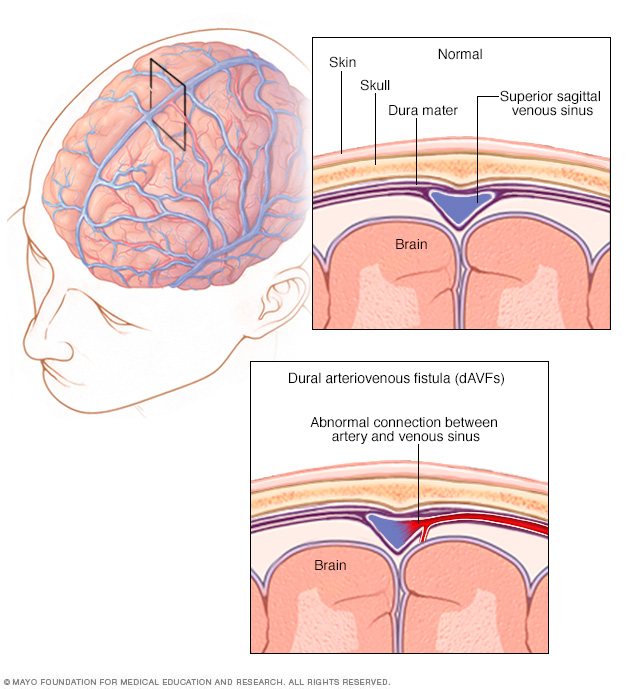 Dural arteriovenous fistulas are abnormal connections that form between an artery and a vein in the tough covering over the brain or spinal cord.

Some people with a dAVF may not have any symptoms. However, apparent symptoms can be characterized either as aggressive or benign.

Aggressive dAVF symptoms can result either from bleeding in the brain (intracerebral hemorrhage) or from neurological effects of non-hemorrhaging neurological deficits (NHNDs).

Bleeding in the brain often causes sudden onset of a headache with varying degrees of neurological disability related to the location and size of the hemorrhage.

By contrast, an NHND usually develops more gradually, over days to weeks, and typically produces a set of symptoms related to its location. These aggressive symptoms can include seizures, speech or language issues, face pain, dementia, Parkinsonism, coordination issues, burning or prickling sensations, weakness, apathy, failure to thrive, and symptoms related to increased pressure such as headaches, nausea and vomiting.

More benign dAVF symptoms can include both hearing issues (often a bruit behind the ear, also known as pulsatile tinnitus) and vision problems including visual deterioration, eye bulge, swelling in the eye lining, eye-related palsies and cavernous sinus syndrome.

In rare cases, progressive dementia may occur due to venous hypertension.

Make an appointment with a doctor if you develop any signs or symptoms that seem unusual or that worry you.

Seek medical help immediately if you experience any symptoms of seizure, or symptoms that suggest brain hemorrhage, such as:

Most dural arteriovenous fistulas have no clear origin, although some result from identifiable causes such as traumatic head injury, infection, previous brain surgery or tumors. Most authorities think that dAVFs involving the larger brain veins usually arise from progressive narrowing or blockage of one of the brain's venous sinuses, which route circulated blood from the brain back to the heart.

Genetic risk factors for dAVFs include those predisposing to vein thrombosis, such as coagulation abnormalities that increase the risk for occlusion of the vein sinuses.

Most frequently, dAVFs affect people in their late-middle years (roughly from 50 to 60 years old). However, dAVFs can occur in younger age groups as well, including in children.

Recent evidence does suggest that benign meningeal tumors may also be associated with the development of dAVFs.

If you have signs or symptoms of a dural arteriovenous fistula (dAVF), your doctor may recommend that you undergo diagnostic tests, including:

CT head scans can show fluid buildup caused by heightened cortical vein blood pressure as well as actual bleeding, which may be caused by a dAVF but occur elsewhere in the brain's venous system.

MRIs can establish the shape and extent of a dAVF, detect any micro-hemorrhages (very small bleed locations), and determine the impact of any abnormal blood vessel structures related to the fistula itself.

Catheter-based cerebral angiography (also known as digital subtraction angiography) is still the most reliable and definitive tool on dAVF diagnosis. It's essential for defining:

Superselective angiography may also be required to identify the area of convergence of the feeding dural arteries and the origin of the draining vein.

Write down questions to ask your doctor.

Preparing a list of questions will help you make the most of your time with your doctor. List your questions from most important to least important in case time runs out. Most of these would be covered during your visit. Some examples of good questions to ask your doctor include:

Surgery (to disconnect a fistula)

In addition to the questions you've prepared to ask your doctor, don't hesitate to ask questions during your appointment at any time that you don't understand something.

Your doctor is also likely to ask you a number of questions:

Certain conditions and activities can trigger seizures, so it may be helpful to: