Bronchiolitis is a common lung infection in young children and infants. It causes inflammation and congestion in the small airways (bronchioles) of the lung. Bronchiolitis is almost always caused by a virus. Typically, the peak time for bronchiolitis is during the winter months.

Bronchiolitis starts out with symptoms similar to those of a common cold, but then progresses to coughing, wheezing and sometimes difficulty breathing. Symptoms of bronchiolitis can last for several days to weeks.

Most children get better with care at home. A small percentage of children require hospitalization. 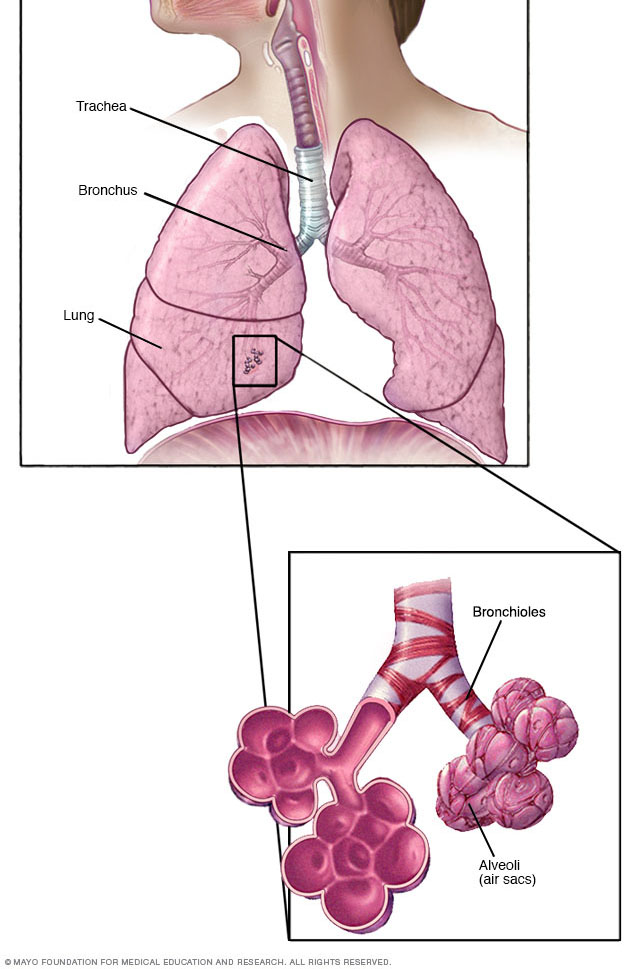 Bronchioles and alveoli in the lungs

In your lungs, the main airways (bronchi) branch off into smaller and smaller passageways — the smallest, called bronchioles, lead to tiny air sacs (alveoli).

For the first few days, the signs and symptoms of bronchiolitis are similar to those of a cold:

After this, there may be a week or more of difficulty breathing or a whistling noise when the child breathes out (wheezing).

Many infants also have an ear infection (otitis media).

If it's difficult to get your child to eat or drink and his or her breathing becomes more rapid or labored, call your child's doctor. This is especially important if your child is younger than 12 weeks old or has other risk factors for bronchiolitis — including premature birth or a heart or lung condition.

The following signs and symptoms are reasons to seek prompt medical attention:

Bronchiolitis occurs when a virus infects the bronchioles, which are the smallest airways in your lungs. The infection makes the bronchioles swell and become inflamed. Mucus collects in these airways, which makes it difficult for air to flow freely in and out of the lungs.

Most cases of bronchiolitis are caused by the respiratory syncytial virus (RSV). RSV is a common virus that infects just about every child by 2 years of age. Outbreaks of RSV infection occur every winter, and individuals can be reinfected, as previous infection does not appear to cause lasting immunity. Bronchiolitis also can be caused by other viruses, including those that cause the flu or the common cold.

The viruses that cause bronchiolitis are easily spread. You can contract them through droplets in the air when someone who is sick coughs, sneezes or talks. You can also get them by touching shared objects — such as utensils, towels or toys — and then touching your eyes, nose or mouth.

Bronchiolitis typically affects children under the age of 2 years. Infants younger than 3 months of age are at greatest risk of getting bronchiolitis because their lungs and immune systems aren't yet fully developed.

Other factors that are linked with an increased risk of bronchiolitis in infants and with more-severe cases include:

Complications of severe bronchiolitis may include:

If these occur, your child may need to be in the hospital. Severe respiratory failure may require that a tube be inserted into the windpipe (trachea) to help the child's breathing until the infection has run its course.

If your baby was born prematurely, has a heart or lung condition, or has a depressed immune system, watch closely for beginning signs of bronchiolitis. The infection can quickly become severe. In such cases, your child will usually need hospitalization.

Because the viruses that cause bronchiolitis spread from person to person, one of the best ways to prevent it is to wash your hands frequently — especially before touching your baby when you have a cold or other respiratory illness. Wearing a face mask at this time is appropriate.

If your child has bronchiolitis, keep him or her at home until the illness is past to avoid spreading it to others.

Other commonsense ways to help curb infection include:

There are no vaccines for the most common causes of bronchiolitis (RSV and rhinovirus). However, an annual flu shot is recommended for everyone older than 6 months.

Infants at high risk of the RSV infection, such as those born prematurely or with a heart or lung condition or who have a depressed immune system, may be given the medication palivizumab (Synagis) to decrease the likelihood of RSV infections.

Tests and X-rays are not usually needed to diagnose bronchiolitis. The doctor can usually identify the problem by observing your child and listening to the lungs with a stethoscope.

If your child is at risk of severe bronchiolitis, if symptoms are worsening or if another problem is suspected, your doctor may order tests, including:

Your doctor may also ask you about signs of dehydration, especially if your child has been refusing to drink or eat or has been vomiting. Signs of dehydration include sunken eyes, dry mouth and skin, sluggishness, and little or no urination.

Bronchiolitis typically lasts for two to three weeks. Most children with bronchiolitis can be cared for at home with supportive care. It's important to be alert for changes in breathing difficulty, such as struggling for each breath, being unable to speak or cry because of difficulty breathing, or making grunting noises with each breath.

Drugs that open the airways (bronchodilators) haven't been found to be routinely helpful and typically aren't given for bronchiolitis. In severe cases, your doctor may elect to try a nebulized albuterol treatment to see if it helps.

Oral corticosteroid medications and pounding on the chest to loosen mucus (chest physiotherapy) have not been shown to be effective treatments for bronchiolitis and are not recommended.

A small percentage of children may need hospital care to manage their condition. At the hospital, a child may receive humidified oxygen to maintain sufficient oxygen in the blood, and he or she may receive fluids through a vein (intravenously) to prevent dehydration. In severe cases, a tube may be inserted into the trachea to help the child's breathing.

Although it may not be possible to shorten the length of your child's illness, you may be able to make your child more comfortable. Here are some tips to try:

You're likely to start by seeing your family doctor or your child's doctor. Here's some information to help you get ready for your appointment, and what to expect from your doctor.

Questions to ask your doctor may include the following:

Don't hesitate to ask more questions during your appointment.

Your doctor may ask questions, such as:

Your doctor will ask additional questions based on your responses and your child's symptoms and needs. Preparing and anticipating questions will help you make the most of your time with the doctor.