Stem cells: What they are and what they do

You've heard about stem cells in the news, and perhaps you've wondered if they might help you or a loved one with a serious disease. You may wonder what stem cells are, how they're being used to treat disease and injury, and why they're the subject of such vigorous debate.

Here are some answers to frequently asked questions about stem cells.

What are stem cells?

Stem cells are the body's raw materials — cells from which all other cells with specialized functions are generated. Under the right conditions in the body or a laboratory, stem cells divide to form more cells called daughter cells.

These daughter cells become either new stem cells or specialized cells (differentiation) with a more specific function, such as blood cells, brain cells, heart muscle cells or bone cells. No other cell in the body has the natural ability to generate new cell types. 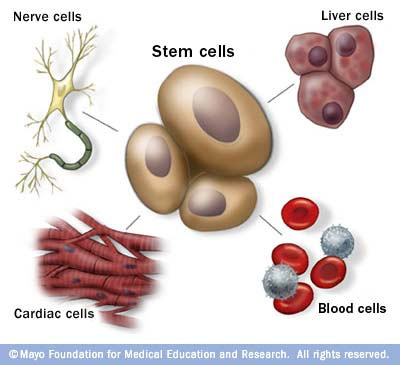 Stem cells are the body's master cells. All other cells arise from stem cells, including blood cells, nerve cells and others.

Why is there such an interest in stem cells?

Where do stem cells come from?

There are several sources of stem cells:

Why is there a controversy about using embryonic stem cells?

Where do these embryos come from?

The embryos being used in embryonic stem cell research come from eggs that were fertilized at in vitro fertilization clinics but never implanted in women's uteruses. The stem cells are donated with informed consent from donors. The stem cells can live and grow in special solutions in test tubes or petri dishes in laboratories.

Why can't researchers use adult stem cells instead?

Adult stem cells are also more likely to contain abnormalities due to environmental hazards, such as toxins, or from errors acquired by the cells during replication. However, researchers have found that adult stem cells are more adaptable than was first thought.

What are stem cell lines and why do researchers want to use them?

A stem cell line is a group of cells that all descend from a single original stem cell and are grown in a lab. Cells in a stem cell line keep growing but don't differentiate into specialized cells. Ideally, they remain free of genetic defects and continue to create more stem cells. Clusters of cells can be taken from a stem cell line and frozen for storage or shared with other researchers.

What is stem cell therapy (regenerative medicine) and how does it work?

Stem cell therapy, also known as regenerative medicine, promotes the repair response of diseased, dysfunctional or injured tissue using stem cells or their derivatives. It is the next chapter in organ transplantation and uses cells instead of donor organs, which are limited in supply.

Researchers grow stem cells in a lab. These stem cells are manipulated to specialize into specific types of cells, such as heart muscle cells, blood cells or nerve cells.

Have stem cells already been used to treat diseases?

Researchers are testing adult stem cells to treat other conditions, including a number of degenerative diseases such as heart failure.

What are the potential problems with using embryonic stem cells in humans?

For embryonic stem cells to be useful, researchers must be certain that the stem cells will differentiate into the specific cell types desired.

What is therapeutic cloning, and what benefits might it offer?

This donor nucleus is then injected into the egg, replacing the nucleus that was removed, in a process called nuclear transfer. The egg is allowed to divide and soon forms a blastocyst. This process creates a line of stem cells that is genetically identical to the donor's cells — in essence, a clone.

Some researchers believe that stem cells derived from therapeutic cloning may offer benefits over those from fertilized eggs because cloned cells are less likely to be rejected once transplanted back into the donor and may allow researchers to see exactly how a disease develops.

Has therapeutic cloning in people been successful?

No. Researchers haven't been able to successfully perform therapeutic cloning with humans despite success in a number of other species.