Cancer risk: What the numbers mean

You might wonder about your chances of developing cancer. News reports can make it sound as if every day something is found to dramatically raise your risk. Sorting through all the information and figuring out what's valid can be tricky.

When scientists talk about risk, they're referring to a probability — the chance that something may occur, but not a guarantee that it will. For example, if you flip a coin, there is one chance in two, or a 50 percent chance, that the coin will land heads up.

Risk estimates for cancer and other diseases are determined by studying large groups of people. Researchers focus on the probability that any person or category of people will develop the disease over a certain period of time. They also look to see what characteristics or behaviors are associated with increased or decreased risk.

How is risk expressed?

Absolute risk refers to the actual numeric chance or probability of developing cancer during a specified time period — for example, within the year, within the next five years, by age 50, by age 70, or during the course of a lifetime.

Relative risk is also given as a percentage. For example, the risk of lung cancer for smokers is 2,500 percent higher than it is for people who don't smoke.

When you hear about relative risk, there's no upper limit to the percentage increase in risk. Most people think 100 percent is the highest possible risk, but that isn't true in this case.

A relative risk of 100 percent means your risk is twice as high as that of someone without that risk factor. A 200 percent relative risk means that you are three times as likely to develop that condition. 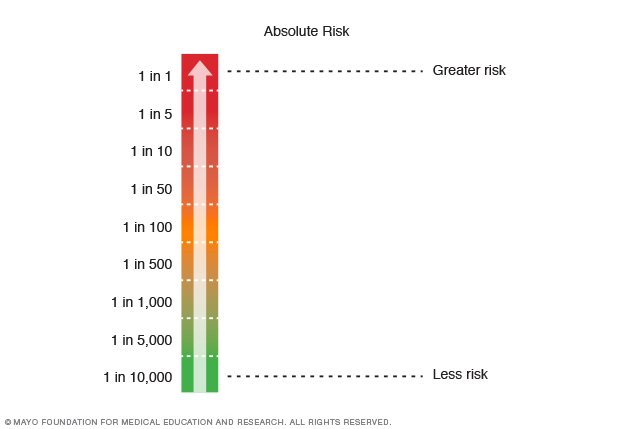 Use this chart to help you understand absolute risk. Absolute risk is often stated as risk of 1 in some number. A 1 in 5 risk is higher than a 1 in 50 risk. 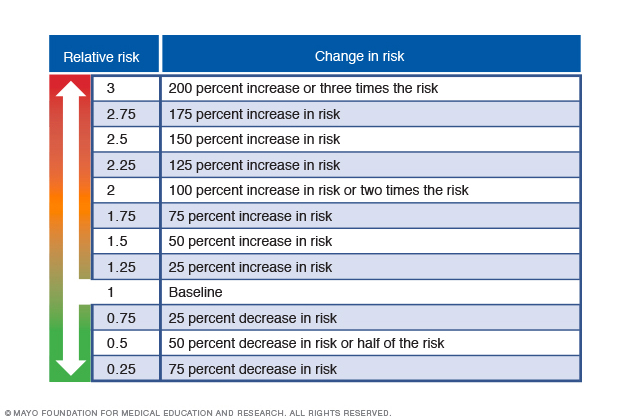 Use this scale to put relative risk in perspective. Risk seems greater when put in terms of relative risk. A 100 percent increase in risk may seem enormous, but if the risk began as 1 in 100 people, the risk is increased to 2 in 100. To some people, this will seem like a large increase in risk. To others, it won't. You and your doctor have to decide what levels of risk are acceptable to you.

Where do cancer risk statistics come from?

Most information about cancer risk and risk factors comes from studies that focus on large, well-defined groups of people. Cancer researchers have identified many of the major environmental factors that contribute to cancer, including smoking for lung cancer and sunlight for skin cancer. Uncovering more subtle cancer risks has proved more difficult.

Many studies of cancer risk factors rely on observational approaches. In these studies, researchers keep track of a group of people for several years without trying to change their lives or provide special treatment. This can help scientists find out who develops a disease, what those people have in common, and how they differ from those who didn't get sick.

How do cancer risk statistics relate to you?

Risk statistics can be frustrating because they can't tell you your risk of cancer. Studies may have found that men have a nearly 40 percent chance of developing cancer in their lifetimes, but that doesn't mean your risk is 40 percent. Your individual risk is based on many different factors, such as age and habits (including eating habits), family history of cancer, and the environment in which you live.

Even then, the combination of risk factors might not apply to you. Cancer is individualistic. You can have two people with the same age, sex, race, socio-economic status and comparative lifestyles and still have different experiences. Risk statistics are helpful in general statements such as "exercising regularly coincides with a reduced risk of chronic diseases, such as cancer." But exercising regularly won't guarantee that you won't get cancer.

Talk with your doctor about your risk of cancer. He or she can review what elements in your life may increase your risk. You can then discuss what to do to help lower this risk.

You might hear a news report about a study that seems to indicate you may be at increased risk of a particular type of cancer. Don't jump to conclusions based on this one report. Take a step back and think about what the risk really means.

Observational studies aren't foolproof. Researchers agree that one study by itself isn't authoritative. This is why you sometimes see studies with seemingly contradictory results.

Scientists weigh the evidence of many research studies over time to better determine whether a finding is true. News reports, though, focus on each new study in isolation, rather than as a part of an evolving picture. This can sometimes cause unnecessary alarm or confusion.

When you read or see a report about cancer risk statistics, pay attention to these details:

News reports that focus on alarming statistics, such as a 300 percent increase in risk, but don't give you context aren't helpful. If you're concerned about the risk, gather more information and talk to your doctor.