ALS: The Inspiration Behind The Ice Bucket Challenge 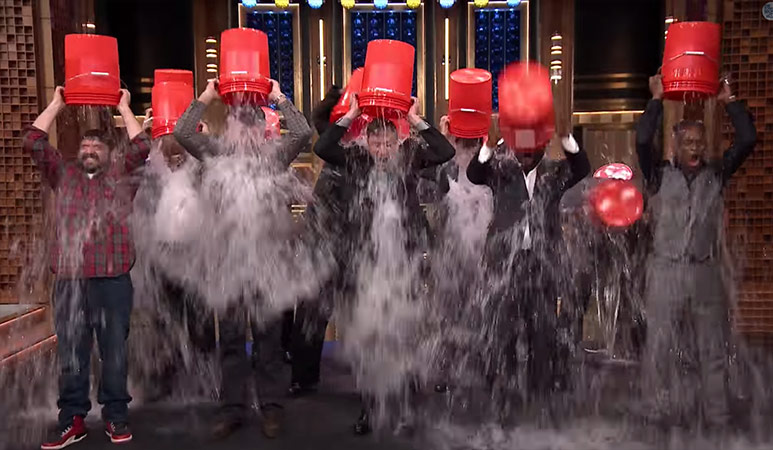 As you probably know by now, there’s no better cure for your bad hair day than the Ice Bucket Challenge.

The Ice Bucket Challenge is a disease awareness and fundraising campaign that took social media by storm almost a month ago to raise awareness of Amyotrophic Lateral Sclerosis (ALS). Donations just keep pouring in.

As of Thursday, August 21, the ALS Association and their nationwide network of chapters reported having received over $41 million in donations since July 29th, compared to just $2.1 million from the same time period last year. In addition, over 739,000 new ALS donors were registered; no doubt most involved in the Ice Bucket Challenge phenomenon themselves.

Everyone seems to be jumping on the bandwagon: from basketball sports legends like LeBron James, to The Tonight Show host Jimmy Fallon, to former President George W. Bush, the viral list goes on.

Most importantly, neighborhood citizens are joining in, as well, to learn about a devastating and fatal disease and help to make a difference.

The challenge itself is pretty simple: grab a large bucket of ice cold water and dump it on your head, videotape the event to splash across social media sites, and then nominate three others to take their own challenge within 24 hours. In turn, people can accept the challenge and designate their own nominees, or they can make a donation to an ALS organization of their choice. As one would expect, it looks like many are generously accepting both challenges.

Unlike breast cancer or heart disease, ALS was not a familiar disease for many of the newfound ALS supporters. In fact, according to The ALS Association, only about 50 percent of the nation was familiar with ALS, also known as Lou Gehrig's disease, prior to the Ice Bucket Challenge. Lou Gehrig, a beloved American baseball legend who played with the New York Yankees for 17 seasons, died of ALS complications in 1941.

The Ice Bucket Challenge was started by none other than a former Boston College baseball player and current director of baseball operations, Pete Frates. Frates, who has ALS, started the challenge last month with friend Pat Quinn from Queens, N.Y., who also suffers from the ailment.

ALS is a fatal disease with no cure. Approximately 5,600 people in the U.S. are diagnosed with ALS each year. ALS leads to a slow degeneration of nerve cells that control muscle movements and an eventual loss of muscle control. Muscle wasting, paralysis, and loss of vital functions such as speech, swallowing, and breathing eventually occur.

ALS plays no favorites -- it can strike anyone. Although the cause of ALS remains unknown, some cases appear to be inherited as certain genes may increase the risk of developing the illness. The neurodegenerative disease usually strikes patients between 50 and 70 years of age, and affects men slightly more often than women. The average life expectancy of an ALS patient ranges from two to five years from the time of diagnosis, although roughly twenty percent of patients may live longer, according to the ALS Association.

At this time, only one medication, riluzole (Rilutek), is approved by the U.S. Food and Drug Administration (FDA) for treatment of ALS. Riluzole, which blocks the nerve cell messenger glutamate, is not a cure for ALS, but may delay disease progression and extend survival for several months. More recent reviews have shown that survival may even be longer than originally seen in clinical trials with riluzole, although randomized controlled studies are needed to confirm this extended survival benefit.

Awareness and education are the key to promoting research for an ALS cure. Donations are needed not only to support studies, but to help provide services for people with ALS, which can be a costly burden to their family.

That’s where you come in. Have you stepped up to the plate to do an Ice Bucket Challenge?

Visit the ALS Association to learn more facts about ALS and make your donation today.